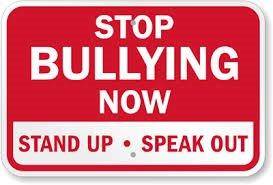 This piece was first published on 12 July 2014 – I was recently motivated to re-post it here.

Bullies don’t just reduce their prey to emotional rubble; their conduct leaves a trail of untold destruction; of broken spirits and of broken dreams for those close to the victim too.

If you are a witness to bullying do you reach out to protect and defend the victim or do you look the other way?  Onlookers can be either part of the bullying problem or an important part of the solution to stop bullying.

During the past many months, indeed years, I have tried to come to terms with the affects that bullies have had on those close to me and those who have made representation and sought help via my former workplace.

It is true that kids can be cruel and one could argue that bullying is part of growing up.  I don’t agree, and that train of thought doesn’t make it at all acceptable.

When taunts are delivered in such a way that the young victim questions their self-worth and their confidence is crushed to a level resembling the pulverisation of rock to fine grains of sand, it is not OK to look the other way.

In school yards and in workplaces everywhere students and employees have the right to be protected and to feel safe as they go about learning and earning.  When those who have the capacity and the obligation to intervene and stop the bullying behaviour and either chose not to, or their actions are ineffective, that is when lives and livelihoods are placed in jeopardy.

In schools there are policies and procedures, forms and frameworks.  However they are only as good as those left to administer them.  Fortunately for me, those who are in that position of power and trust are putting measures in place to deal with the issue brought to their attention with respect and authority.

Whilst the workplace bullying provisions under the Fair Work Act 2009 will not create powers to make orders on reinstatement or compensation, there will nevertheless be increased pressure and onus on businesses to be proactive about preventing workplace bullying and promptly dealing with any related complaints, in order to avoid an intervention by the Commission.

Knowing this, I am left to wonder why employers are not more proactive in investigating and supporting those who report instances of bullying and harassment in the workplace.

In a case close to home, I am led to wonder how things might have been had the matter been treated differently.  I am not suggesting that there was a lack of action but rather that in some cases different forms of investigation must take place.  Not everyone is able to easily articulate their concerns either verbally or in writing.  Some employers seek to have a form completed before action is commenced.  This immediately puts those who are not able to fluently write their story; or are reluctant to for fear of further harassment, at an immediate disadvantage.

When an adult is reduced to an anxious mess, seeks intervention and can no longer function on many levels, it is then that the true impact of the repeated and habitual abuse, intimidation, aggression and domination takes hold.

It is often left up to the individual, with the help of their support networks if they have any, to build a road to recovery and to commence healing.  Sadly, not everyone completes the journey.

With our aging population I fear there will be more cases and instances of elder abuse and bullying in care facilities and behind the closed doors of homes in our neighbourhoods.

For those who have the means and there are resources in our communities to care for our aging loved ones, we hand over the care and control of their welfare and wellbeing.  In doing so, we place absolute trust in the institutions to provide a safe haven.  Care environments, especially those catering for people with special needs are challenging places to work in.  I personally could not do the work the thousands of carers and nursing staff do on a daily basis.

So given the challenging environment it would be ignorant to believe that bullying and harassment does not occur. Not all alleged cases of bullying are obvious though.  Some bullying is done in a way which is so meticulous and callous that it mostly goes unnoticed.  I recall stories of family members telling me about instances whereby their loved ones were left to sit in soiled bed linen as a form of punishment or where food and drink was placed just out of reach to torment.  This form of bullying is at its most cruel and is socially and morally unacceptable.

Then there are the conversations which are had which are more representative of a parent admonishing a child rather than two adults engaging in dialogue which is respectful and cordial.  This too is form of bullying whereby the bully, in a position of power, engages in verbal, social or psychological behaviour that is harmful.  How does it go unnoticed and unreported?

This blog would not be complete without my thoughts on cyber bullying.  Information and communication technologies, when used in the way intended, are powerful mediums for sharing opinions, news, thoughts; and for those who are isolated through distance or disability, are marvellous ways to connect socially.

Every minute of every day codes of conduct (written and otherwise) are broken. Cyber bullies trawl the depths of social media sites to deliberately post provocative messages with the intent of causing maximum harm.  You can either choose to react and fuel the argument or you can chose to ignore it and stop the troll in their tracks.

My final word is to those in positions of power and influence (eg politicians, sports men and women and celebrities).

You have the ability and are in the unique position to be role models and to lead by example.  I would ask that use harness this amazing position and to act each day with decorum, dignity and above all with respect.  Your actions will speak louder than words and you may just inspire someone to take a different path.

Bullies do not win.  Nobody wins.

Bullies destroy lives and extinguish once vibrant souls. If you are a bully, you probably have not read these words but if per chance you have; and I have pricked your conscience please get help.

If you are the victim of bullying or know somebody who is, my message is simple, report the abuse, take control and change the course on a heading for a more resilient you!

Here are some useful links:

The Australian Human Rights Commission (1300 656 419) has a complaint handling service that may investigate complaints of discrimination, harassment and bullying http://www.humanrights.gov.au/complaints_information/index.html

Kids Help Line 1800 55 1800 is a free and confidential, telephone counselling service for 5 to 25 year olds in Australia. http://www.kidshelp.com.au/

Lifeline (13 11 14) is a free and confidential service staffed by trained telephone counsellors. http://www.lifeline.org.au