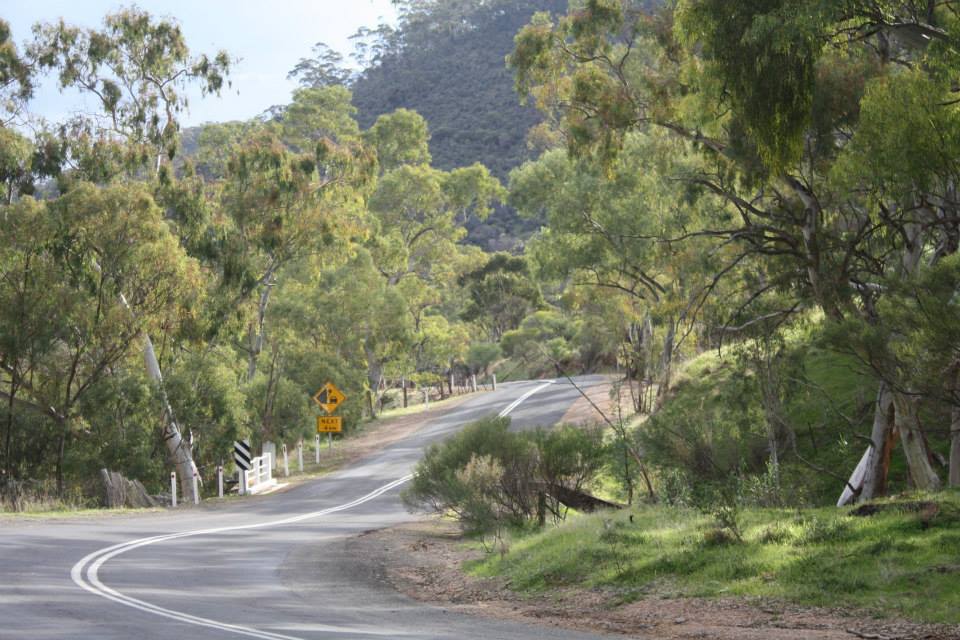 I first posted this on August 31, 2014 when the Gorge Road reopened. Yesterday marked the start of devastating Bangor Fire back in 2014. Six years on and fire continues to ravage our beautiful country.

The Bangor fire, like other significant bushfires in South Australia including Wangary, Ash Wednesday and Kangaroo Island (those of 2007 and of 2019 and are ongoing), will become etched in people’s minds with stories shared about community spirit and the tireless efforts of CFS firefighters.

This from the CFS Website: What started as a small fire about 25 kilometres north-east of Port Pirie had the next morning expanded to what was described by firefighters as an area “the size of two football ovals” in an area of inaccessible and difficult terrain. Firefighters worked in shifts around the clock for 14 days before the Bangor fire was declared ‘Contained’ on 30 January and ‘Controlled’ on 6 February. Two days later with the onset of winds and hot temperatures the fire broke control lines in the south western corner and threatened the townships of Laura, Wirrabara and Stone Hut, and the small community of Beetaloo Valley.

31 days after it started, after burning more than 35,000 hectares, the Bangor fire was again declared as ‘Controlled’ on 14 February.  While 5 houses were destroyed, dozens were saved. A number of sheds were lost, with extensive damage sustained to fencing, and at least 700 sheep perished in the fire. 24 injuries were recorded but none serious, most involving smoke inhalation and heat exhaustion due to the extreme weather conditions that crews were working in.  Many CFS veterans are hard-pressed to recall a similar incident requiring such a sustained commitment of firefighting resources.

These are my words…..

Nature is a splendid thing. The regeneration and rejuvenation of the Port Germein Gorge and the Southern Flinders, following the devastating January fires, is remarkable.

Just yesterday, as I drove north towards the Southern Flinders Ranges and as the Bluff came into view, the scars of the January fires were more apparent.  The starkness of the Range took on the appearance of leather in need of nourishment.  The type of leather of old boots, old boots which had walked too many miles and endured too much sun.

With the final days of the winter sun high in the sky the scenery is distinguished.  I am confident the vista will respond to nourishment, by way of moisture and care, just as old boots would. The country needs rain.

As I turned due east, off the Augusta highway and climbed the gentle rise of the foothills, I wasn’t quite prepared for the brightness of the sun as it shone through, not filtered by the leaves that prior to January were once on the majestic gums.

As I meandered through the gorge I stopped along the way to capture images of the landscapes around each bend.  As I stepped out of the car and onto the newly paved road my shoes stuck to tar, not quite set.  The distinctive smell of bitumen and gravel filled my nostrils.  As I walked down an embankment the scent was soon overpowered with the perfume of damp earth, eucalyptus and Flinders Range wattle blossom on the ether.

A pair of Galahs foraged in freshly spread straw and earth, a manmade mattress to support new growth and hold the topsoil in place. I listened to their chatter.  All at once a chorus of bird songs rang out like a symphony and a blue crane flapped its wings in time as it took off, startled by my presence.

I am told that for those who entered the gorge and its environs only days after the fires that the silence was deafening.  No bird songs because there were no birds.  No mammals, lizards or other life to speak of.  However, if one looked in a discerning fashion, small buds and shoots were already appearing on scorched florae. Whilst the threat of Rachel Carson’s ‘Silent Spring’ threatens the world in general, here for the moment, nature was in fine song.

Now a day before spring, the first anniversary of the devastating fires is nearer than the original event of January this year.  It wasn’t just the evidence of the destruction of the fires which was striking but the signs of erosion caused by the torrents of water which descended upon the parched and charcoaled landscape.   In a peculiar twist of fate it was the equally devastating rain which did eventually quell the immortal monster of a blaze, enabling control to be taken by mortal men and women.

Wild oats now grow high, sentries to resilience, dangerous fuel for a hungry fire yet to be born. The air is warm, too warm really.  Are we ready for the next fire danger season?

For those of you living in our beautiful regions, have you prepared your property?  Do you have a plan in place? I know many who do.  For those who do not….three words should motivate you to be at the ready.  Prepare. Act. Survive.

Blessings be bestowed upon those who have not stopped rebuilding nor grieving.

Never rest, never take for granted our beautiful surroundings or the unforgiving climate in which we live.

Footnote: Special mention to the contractors and volunteers who have all contributed to the rebuilding of this important artery in the Southern Flinders Ranges.

Some incredible footage of the painstaking and environmentally-sensitive repairs can be found at this link: